Your generous donation will help fund our campaigns necessary in order to help suffering elephants in North America. FACE is greatly needed to bring these elephants to sanctuary. 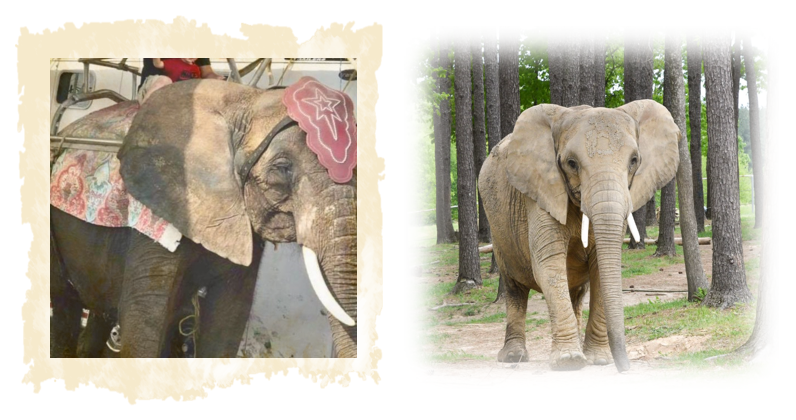 Your generous donation will help fund our campaigns necessary in order to help suffering elephants in North America. FACE is greatly needed to bring these elephants to sanctuary.

YOU can help make a difference in the lives of ELEPHANTS!

Free All Captive Elephants (FACE), is a dedicated nonprofit organization working to rescue suffering elephants held captive in circuses and roadside zoos in North America. Our work is VITAL in getting captive elephants to accredited sanctuaries waiting and ready to receive them.
FACE is committed to getting elephants to sanctuaries accredited by the Global Federation of Animal Sanctuaries (GFAS). GFAS is the gold standard for sanctuaries.
Our mission is to provide education, intervention, and litigation, that will lead to sanctuary of ALL elephants inhumanely held in captivity in circuses and zoos in North America.

FACE is committed and will continue to follow through with helping to place the elephants into much needed sanctuaries.

Free All Captive Elephants' work is vital in the lives of captive elephants. We are one the nation's only 501(c)(3) non-profit with sole focus on freeing captive elephants from circuses and inhumane zoos. Without our work, elephants will continue to languish in captivity. The sanctuaries can accommodate more elephants, but it is OUR job to get them there. We need your help to accomplish this goal. Our success means their freedom.

* Please visit our website: https://freeallcaptiveelephants.org/ to learn more about FACE and the important work we do to help captive elephants.

This is Asha’s story…

Asha is a 39-year-old African female elephant who was born in Zimbabwe somewhere between 1982-83. Asha lost her entire family in a horrific culling slaughter orchestrated by the government of Zimbabwe in 1984. She was sent to the USA by the Schultz Company to later be exploited by the Natural Bridge Zoo in Virginia at only two years old.

Asha was a frightened baby destined for a life of human torture. And torture it has been.

The Natural Bridge Zoo has nearly 150 Violations of the Animal Welfare Act, the most recent in January 2022, and has had its permit suspended twice, only to have it reinstated just a short time later. Yet, both state and federal agencies continue to renew the zoo’s exhibitor permit year after year.

Asha has been a solitary elephant held at this roadside zoo for most of her life. She is almost 40 years old. She has been forced to give backbreaking rides for nearly two decades to over 10,000 people every season. She has a concrete barn floor that is not heated in the winter. She has no pool and is chained frequently in an exhibit with little freedom to roam. Decades of public complaints to the agencies tasked with protecting Asha have fallen on deaf ears. The Natural Bridge Zoo's owner has nearly 150 violations of the Federal Animal Welfare Act (AWA). The authorities are waking up as we have been successful in getting The Natural Bridge Zoo on their radar. FACE is in communication with key authorities.

FACE is committed in working to expose the decades of public complaints to the agencies tasked with protecting Asha that have fallen on deaf ears. It is time to bring this issue to the public’s attention. FACE recently was successful in raising funds to erect a highly visible billboard near Richmond, Virginia so that over 300,000 people per week could see our message about the Natural Bridge Zoo’s nearly 150 violations of the AWA. Our goal is to assist the State of Virginia to seize Asha and place her in a GFAS sanctuary.

Since learning about Asha, FACE has been conducting an ongoing advocacy campaign via email and social media to raise awareness of Asha’s situation at the Natural Bridge Zoo. For the past three years we have been working with the legislature in Virginia to pass more laws to protect elephants under Virginia’s Comprehensive Animal Care Law which includes the state’s anti-cruelty provisions.

On March 28, 2018, FACE, worked side by side with The Animal Defense Partnership, Inc. (“ADP”), In Defense of Animals, One World Conservation, and Anna Katogiritis, DVM (formerly of Jane Goodall’s Roots and Shoots Program, Greece) to file a civil and criminal wildlife complaint with Virginia Dept. of Game and Inland Fisheries (now known as Virginia Dept. of Wildlife Resources) on behalf of numerous Virginia residents against the zoo and its owner, Karl Mogensen for abuse and neglect of Asha. Our complaint called on this law enforcement agency to seize Asha and revoke Mogensen’s exhibitor’s permit. (Please contact us if you would like a copy of this complaint.)

On October 11, 2019, in collaboration with The Humane Society of the United States, The Animal Defense Partnership and others, FACE submitted a detailed letter along with over 30 exhibits to the Virginia Department of Game and Inland Fisheries (DGIF) urging, among other things, that DGIF not renew the Natural Bridge Zoo’s (NBZ) Permit to Exhibit Wild Animals in Virginia and seize the animals at the zoo including Asha the Elephant.

In January of 2021, to support our work to free Asha from the Natural Bridge Zoo, FACE retained a world-renowned elephant expert to prepare a health assessment on Asha. He traveled over 2,000 miles to the zoo to take undercover footage as well as get a first-hand look at Asha, and all the animals at the zoo and the conditions under which they are kept. The results of this assessment are clear, Asha is being held in inhumane conditions, not the least of which is the fact that Asha is living as a solitary elephant which is a cruel existence for an innately social animal. This assessment is being sent to key authorities at both the state and federal level.

In January of 2022, FACE filed a complaint with the USDA on behalf of a member of the public who contacted us with concerns about Asha’s living conditions and handling. This complaint resulted in the USDA’s January 2022 finding that the zoo is continuing to violate the Animal Welfare act.

LEGISLATION - The Key to Change - FACE works continuously with legislation around the country to improve the conditions and protections for elephants on both the state and federal levels.

The Traveling Exotic Animal and Public Safety Protection Act (TEAPSPA) is a federal bill that is currently pending. If passed, this bill will prohibit the use of exotic and wild animals in traveling performances nationwide, in the United States. FACE and numerous animal advocacy organizations join with Animal Defenders International ADI), who are leading the charge to get this important piece of legislation passed. You can help end circus suffering by contacting your own state legislators to educate them on TEAPSPA. (See our freeallcaptiveelephants.org website on TEAPSPA)

Nosey's Law - New Jersey - Nosey's Law, the first law of its kind in the nation, prohibits the use of elephants and other wild or exotic animals in traveling animal acts. FACE worked closely with former Senator Raymond Lesniak, the bill's creator, on Nosey's Law from the first introduction in the Senate Committee on September 12th, 2016, until the bill was passed into law on December 14th, 2018. We continued to work alongside of Senator Nilsa Cruz-Perez after Senator Lesniak retired. We gave key testimony and were present at every legislative hearing. We rallied our thousands of members on social media to take vital actions that made an important impact on the passing of the bill. FACE continues to stay vigilant in New Jersey making sure Nosey's Law is enforced and upheld. We are committed to following through making sure this law is never BROKEN and no circus EVER steps foot in New Jersey with exotic and wild animals. We have already been tested in 2020 where Garden Bros. Circus was advertising different locations in New Jersey. Needless to say, they never showed up. They never had a chance because FACE had taken all actions necessary to make sure they were going to be following the guidelines of Nosey's Law. They decided it wasn't worth coming. Their time is done in New Jersey, and we are making sure this is repeated in as many states as possible. Either they change their act, or they are not welcome in New Jersey. FACE continues to help other states in their efforts to pass laws like Nosey's Law. 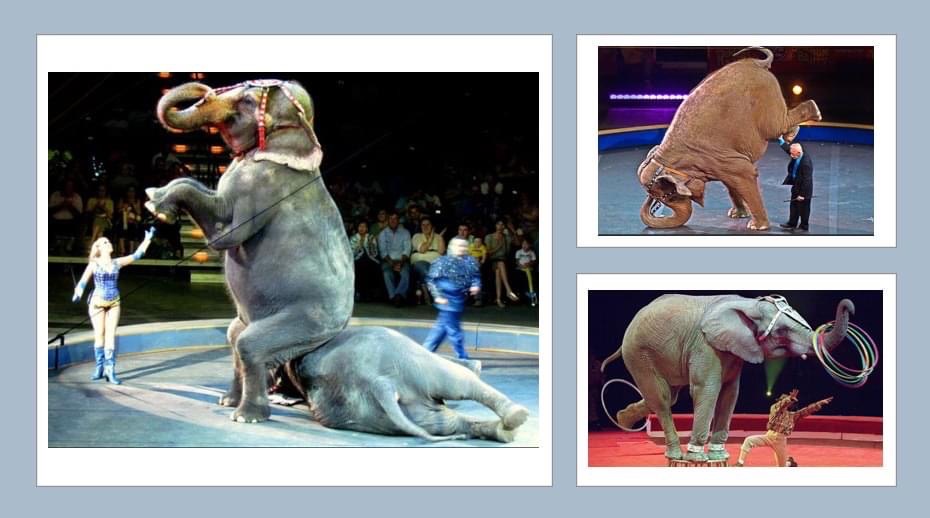 Circuses with elephants such as Jordan World Circus, Carden International, Shriners, Loomis Bros., and Carson and Barnes, Culpepper & Merriweather Circus, all have brutal touring schedules and cover thousands of miles. Some elephants are forced to perform three times per day only to be chained up or placed back into their transport trailers between shows and locations. Circus tracking is vital in the documentation of the abuse occurring while on the road. Public awareness is key to ending the suffering elephants have endured for centuries.

FACE meticulously tracks and documents these circuses through social media and boots on the ground. FACE has been successful in getting many venues to cancel circus events once we educate the state and local authorities and the media of the public safety risks and history of animal abuse by these exhibitors. Because of actions like these, the nation is very aware of the atrocities being committed in circuses and the future of this barbaric industry is coming to an end.

FACE is committed and will continue to follow through with helping to place the elephants into much needed sanctuaries.